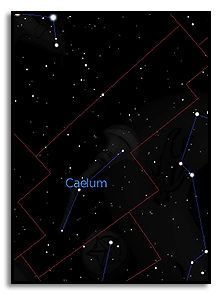 Caelum (Cae, chisel) is a faint constellation in the southern sky, introduced in the 1750s by Nicolas Louis de Lacaille. Its name means "the chisel" in Latin, and it was formerly known as Caelum Scalptorium ("the engraver's chisel"). It is the eighth-smallest constellation, and subtends a solid angle of around 0.038 steradians, just less than that of Corona Australis.

Due to its small size and location away from the plane of the Milky Way, Caelum is a rather barren constellation, with few objects of interest. The constellation's brightest star, Alpha Caeli, is only of magnitude 4.45, and only one other star (Gamma1 Caeli) is brighter than magnitude 5. Other notable objects in Caelum are RR Caeli, a binary star with one planet approximately 20.13 parsecs (65.7 ly) away; X Caeli, a Delta Scuti variable that forms an optical double with Gamma1 Caeli; and HE0450-2958, a Seyfert galaxy that at first appeared as just a jet with no host galaxy visible.

Caelum was first introduced in the eighteenth century by Nicolas Louis de Lacaille, a French astronomer who introduced thirteen other southern constellations at the same time. The name Lacaille gave the constellation was originally romanized to Caelum Scalptorium ("The Engraver's Chisel"), and Francis Baily shortened this name to Caelum after a suggestion by John Herschel. In Lacaille's original chart, the constellation was shown as a burin and an échoppe, although it has come to be recognized simply as a chisel. Johann Elert Bode stated the name as plural, Caela Scalptoris, but this did not stick.