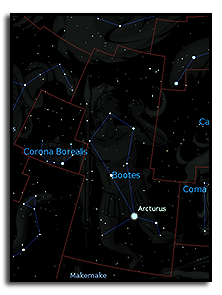 Boötes (Boo, herdsman) is a constellation in the northern sky, located between 0° and +60° declination, and 13 and 16 hours of right ascension on the celestial sphere. The name comes from the Greek Βοώτης, Boōtēs, meaning herdsman or plowman (literally, ox-driver; from boos, related to the Latin bovis, “cow”). The "ö" in the name is a diaeresis, not an umlaut, meaning that each 'o' is to be pronounced separately. One of the 48 constellations described by the 2nd century astronomer Ptolemy, Boötes is now one of the 88 modern constellations. It contains the fourth brightest star in the night sky, the orange-hued Arcturus.

In ancient Babylon the stars of Boötes were known as SHU.PA. They were apparently depicted as the god Enlil, who was the leader of the Babylonian pantheon and special patron of farmers.

The name Boötes was first used by Homer in his Odyssey as a celestial reference point for navigation, described as "late-setting" or "slow to set", translated as the "Plowman". Exactly whom Boötes is supposed to represent in Greek mythology is not clear. According to one version, he was a son of Demeter, Philomenus, twin brother of Plutus, a ploughman who drove the oxen in the constellation Ursa Major. This is corroborated by the constellation's name, which itself means "ox-driver" or "herdsman." The ancient Greeks saw the asterism now called the "Big Dipper" or "Plough" as a cart with oxen. This influenced the name's etymology, derived from the Greek for "noisy" or "ox-driver". Another myth associated with Boötes tells that he invented the plow and was memorialized for his ingenuity as a constellation.

Another myth associated with Boötes by Hyginus is that of Icarius, who was schooled as a grape farmer and winemaker by Dionysus. Icarius made wine so strong that those who drank it appeared poisoned, which caused shepherds to avenge their supposedly poisoned friends by killing Icarius. Maera, Icarius's dog, brought his daughter Erigone to her father's body, whereupon both she and the dog committed suicide. Zeus then chose to honor all three by placing them in the sky as constellations: Icarius as Boötes, Erigone as Virgo, and Maera as Canis Major or Canis Minor. 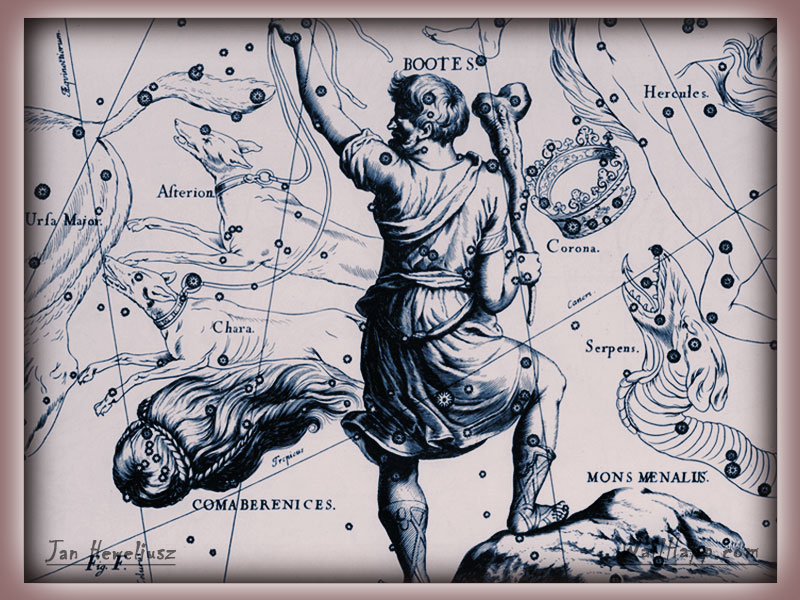 Following another reading, the constellation is identified with Arcas and also referred to as Arcas and Arcturus, son of Zeus and Callisto. Arcas was brought up by his maternal grandfather Lycaon, to whom one day Zeus went and had a meal. To verify that the guest was really the king of the gods, Lycaon killed his grandson and prepared a meal made from his flesh. Zeus noticed and became very angry, transforming Lycaon into a wolf and gave back life to his son. In the meantime Callisto had been transformed into a she-bear, by Zeus's wife, Hera, who was angry at Zeus's infidelity. This is corroborated by the Greek name for Boötes, Arctophylax, which means "Bear Watcher". Callisto in form of a bear was almost killed by her son who was out hunting. Zeus rescued her, taking her into the sky where she became Ursa Major, "the Great Bear". The name Arcturus (the constellation's brightest star) comes from the Greek word meaning "guardian of the bear". Sometimes Arcturus is depicted as leading the hunting dogs of nearby Canes Venatici and driving the bears of Ursa Major and Ursa Minor.

Several former constellations were formed from stars now included in Boötes. Quadrans Muralis, the Quadrant, was a constellation created near Beta Boötis from faint stars. It was invented in 1795 by Jérôme Lalande, an astronomer who used a quadrant to perform detailed astronometric measurements. Lalande worked with Nicole-Reine Lepaute and others to predict the 1758 return of Halley's Comet. Quadrans Muralis was formed from the stars of eastern Boötes, western Hercules, and Draco. It was originally called Le Mural by Jean Fortin in his 1795 Atlas Céleste; it was not given the name Quadrans Muralis until Johann Bode's 1801 Uranographia. The constellation was quite faint, with its brightest stars reaching the 5th magnitude. Mons Maenalus, representing the Maenalus mountains, was created by Johannes Hevelius in 1687 at the foot of the constellation's figure. The mountain was named for the son of Lycaon, Maenalus. The mountain, one of Diana's hunting grounds, was also holy to Pan.