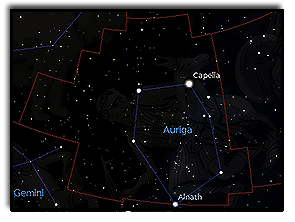 Auriga (Aur, charioteer) is one of the 48 constellations listed by the 2nd-century astronomer Ptolemy and remains one of the 88 modern constellations. Located north of the celestial equator, its name is the Latin word for "charioteer", associating it with various mythological charioteers, including Erichthonius and Myrtilus. Auriga is most prominent during winter evenings in the Northern Hemisphere, along with the five other constellations that have stars in the Winter Hexagon asterism. Because of its northern declination, Auriga is only visible as far as 34° south; for observers farther south it lies partially or fully below the horizon. A large constellation, with an area of 657 square degrees, it is half the size of the largest constellation, Hydra.

The first record of Auriga's stars was in Mesopotamia as a constellation called GAM, representing a scimitar or crook. However, this may have represented just Capella (Alpha Aurigae) or the modern constellation as a whole; this figure was alternatively called Gamlum or MUL.GAM in the MUL.APIN. The crook of Auriga stood for a goat-herd or shepherd. It was formed from most of the stars of the modern constellation; all of the bright stars were included except for Elnath, traditionally assigned to both Taurus and Auriga. Later, Bedouin astronomers created constellations that were groups of animals, where each star represented one animal. The stars of Auriga comprised a herd of goats, an association also present in Greek mythology. The association with goats carried into the Greek astronomical tradition, though it later became associated with a charioteer along with the shepherd.

In Greek mythology, Auriga is often identified as the mythological Greek hero Erichthonius of Athens, the chthonic son of Hephaestus who was raised by the goddess Athena. Erichthonius was generally credited to be the inventor of the quadriga, the four-horse chariot, which he used in the battle against the usurper Amphictyon, the event that made Erichthonius the king of Athens. His chariot was created in the image of the Sun's chariot, the reason Zeus placed him in the heavens. The Athenian hero then dedicated himself to Athena and soon after, Zeus raised him into the night sky in honor of his ingenuity and heroic deeds.

Auriga, however, is sometimes described as Myrtilus, who was Hermes's son and the charioteer of Oenomaus. The association of Auriga and Myrtilus is supported by depictions of the constellation, which rarely show a chariot. Myrtilus's chariot was destroyed in a race intended for suitors to win the heart of Oenomaus's daughter Hippodamia. Myrtilus earned his position in the sky when Hippodamia's successful suitor, Pelops, killed him, despite his complicity in helping Pelops win her hand. After his death, Myrtilus's father Hermes placed him in the sky. Yet another mythological association of Auriga is Theseus's son Hippolytus. He was ejected from Athens after he refused the romantic advances of his stepmother Phaedra, who committed suicide as a result. He was killed when his chariot was wrecked, but revived by Asclepius. Regardless of Auriga's specific representation, it is likely that the constellation was created by the ancient Greeks to commemorate the importance of the chariot in their society.

An incidental appearance of Auriga in Greek mythology is as the limbs of Medea's brother. In the myth of Jason and the Argonauts, as they journeyed home, Medea killed her brother and dismembered him, flinging the parts of his body into the sea, represented by the Milky Way. Each individual star represents a different limb.

Capella is associated with the mythological she-goat Amalthea, who breast-fed the infant Zeus. It forms an asterism with the stars Epsilon Aurigae (ε Aur, ε Aurigae), Zeta Aurigae (ζ Aur, ζ Aurigae), and Eta Aurigae (η Aur, η Aurigae), the latter two of which are known as the Haedi (the Kids). Though most often associated with Amalthea, Capella has sometimes been associated with Amalthea's owner, a nymph. The myth of the nymph says that the goat's hideous appearance, resembling a Gorgon, was partially responsible for the Titans' defeat, because Zeus skinned the goat and wore it as his aegis. The asterism containing the three goats had been a separate constellation; however, Ptolemy merged the Charioteer and the Goats in the 2nd century Almagest. Before that, Capella was sometimes seen as its own constellation—by Pliny the Elder and Manilius—called Capra, Caper, or Hircus, all of which relate to its status as the "goat star". Zeta Aurigae and Eta Aurigae were first called the "Kids" by Cleostratus, an ancient Greek astronomer.

Traditionally, illustrations of Auriga represent it as a chariot and its driver. The charioteer holds a goat over his left shoulder and has two kids under his left arm; he holds the reins to the chariot in his right hand. However, depictions of Auriga have been inconsistent over the years. The reins in his right hand have also been drawn as a whip, though Capella is almost always over his left shoulder and the Kids under his left arm. The 1488 atlas Hyginus deviated from this typical depiction by showing a four-wheeled cart driven by Auriga, who holds the reins of two oxen, a horse, and a zebra. Jacob Micyllus depicted Auriga in his Hyginus of 1535 as a charioteer with a two-wheeled cart, powered by two horses and two oxen. Arabic and Turkish depictions of Auriga varied wildly from those of the European Renaissance; one Turkish atlas depicted the stars of Auriga as a mule, called Mulus clitellatus by Johann Bayer. One unusual representation of Auriga, from 17th-century France, showed Auriga as Adam kneeling on the Milky Way, with a goat wrapped around his shoulders.