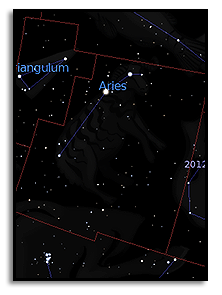 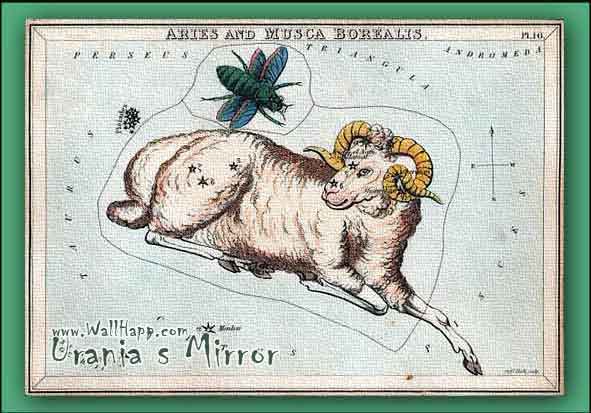 Although Aries came to represent specifically the ram whose fleece became the Golden Fleece of Ancient Greek mythology, it has represented a ram since late Babylonian times. Before that, the stars of Aries formed a farmhand. Different cultures have incorporated the stars of Aries into different constellations including twin inspectors in China and a porpoise in the Marshall Islands. Aries is a relatively dim constellation, possessing only four bright stars: Hamal (Alpha Arietis (α Ari, α Arietis), second magnitude), Sheratan (Beta Arietis (β Ari, β Arietis), third magnitude), Mesarthim (Gamma Arietis (γ Ari, γ Arietis), fourth magnitude), and 41 Arietis or c Arietis (also fourth magnitude). The few deep-sky objects within the constellation are quite faint and include several pairs of interacting galaxies. Several meteor showers appear to radiate from Aries, including the Daytime Arietids and the Epsilon Arietids.

In ancient Egyptian astronomy, Aries was associated with the god Amon-Ra, who was depicted as a man with a ram's head and represented fertility and creativity. Because it was the location of the vernal equinox, it was called the "Indicator of the Reborn Sun". During the times of the year when Aries was prominent, priests would process statues of Amon-Ra to temples, a practice that was modified by Persian astronomers centuries later. Aries acquired the title of "Lord of the Head" in Egypt, referring to its symbolic and mythological importance.

Aries was not fully accepted as a constellation until classical times. In Hellenistic astrology, the constellation of Aries is associated with the golden ram of Greek mythology that rescued Phrixos and Helle on orders from Hermes, taking him to the land of Colchis. Phrixos and Helle were the son and daughter of King Athamas and his first wife Nephele. The king's second wife, Ino, was jealous and wished to kill his children. To accomplish this, she induced a famine in Boeotia, then falsified a message from the Oracle of Delphi that said Phrixos must be sacrificed to end the famine. Athamas was about to sacrifice his son atop Mount Laphystium when Aries, sent by Nephele, arrived.Helle fell off of Aries's back in flight and drowned in the Dardanelles, also called the Hellespont in her honor. After arriving, Phrixos sacrificed the ram to Zeus and gave the Fleece to Aeëtes of Colchis, who rewarded him with an engagement to his daughter Chalciope. Aeëtes hung its skin in a sacred place where it became known as the Golden Fleece and was guarded by a dragon. In a later myth, this Golden Fleece was stolen by Jason and the Argonauts. 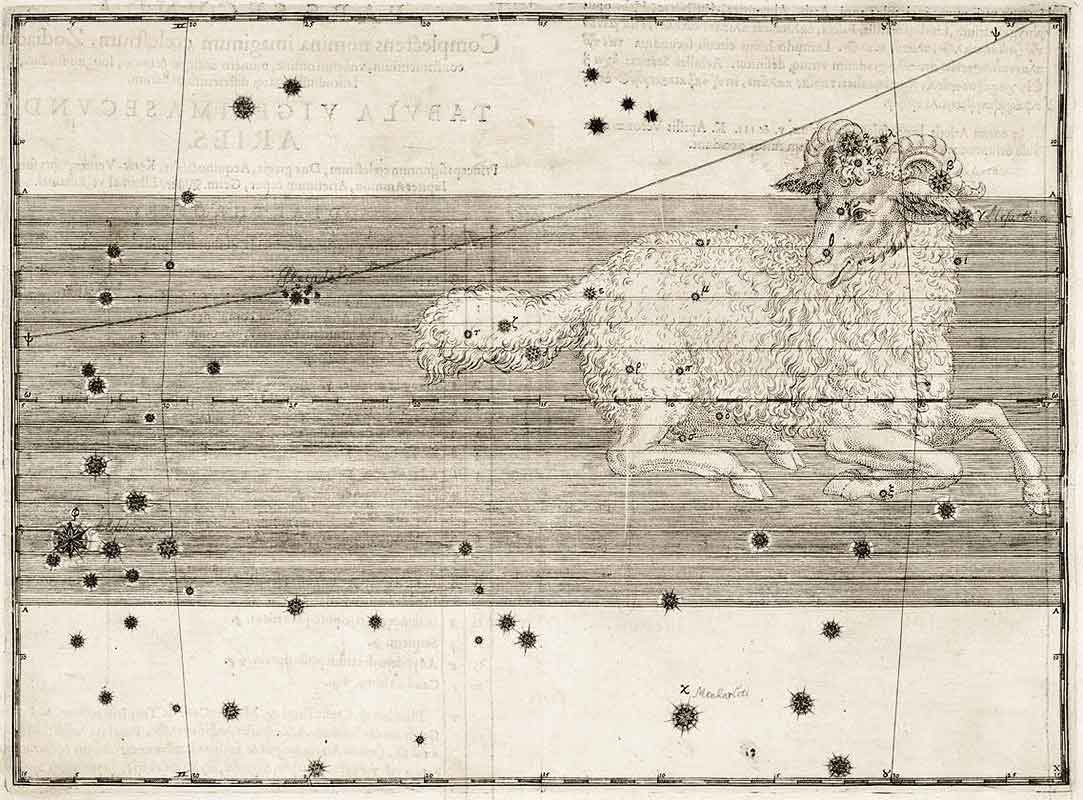 Historically, Aries has been depicted as a crouched, wingless ram with its head turned towards Taurus. Ptolemy asserted in his Almagest (The Almagest is a 2nd-century mathematical and astronomical treatise on the apparent motions of the stars and planetary paths) that Hipparchus depicted Alpha Arietis as the ram's muzzle, though Ptolemy did not include it in his constellation figure. Instead, it was listed as an "unformed star", and denoted as "the star over the head". John Flamsteed, in his Atlas Coelestis, followed Ptolemy's description by mapping it above the figure's head. Flamsteed followed the general convention of maps by depicting Aries lying down. Astrologically, Aries has been associated with the head and its humors. It was strongly associated with Mars, both the planet and the god. It was considered to govern Western Europe and Syria, and to indicate a strong temper in a person.

Medieval Muslim astronomers depicted Aries in various ways. Astronomers like al-Sufi saw the constellation as a ram, modeled on the precedent of Ptolemy. However, some Islamic celestial globes depicted Aries as a nondescript four-legged animal with what may be antlers instead of horns. Some early Bedouin observers saw a ram elsewhere in the sky; this constellation featured the Pleiades as the ram's tail. The generally accepted Arabic formation of Aries consisted of thirteen stars in a figure along with five "unformed" stars, four of which were over the animal's hindquarters and one of which was the disputed star over Aries's head. Al-Sufi's depiction differed from both other Arab astronomers' and Flamsteed's, in that his Aries was running and looking behind itself.