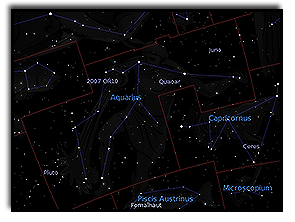 Aquarius (Aqr, water-bearer) is a constellation of the zodiac, situated between Capricornus and Pisces. Its name is Latin for "water-carrier" or "cup-carrier", and its symbol is ♒, a representation of water. Aquarius is one of the oldest of the recognized constellations along the zodiac (the sun's apparent path). It was one of the 48 constellations listed by the 2nd century AD astronomer Ptolemy, and it remains one of the 88 modern constellations. It is found in a region often called the Sea due to its profusion of constellations with watery associations such as Cetus the whale, Pisces the fish, and Eridanus the river.

Aquarius is identified as GU.LA "The Great One" in the Babylonian star catalogues and represents the god Ea himself, who is commonly depicted holding an overflowing vase. The Babylonian star-figure appears on entitlement stones and cylinder seals from the second millennium. It contained the winter solstice in the Early Bronze Age. In Old Babylonian astronomy (Old Babylonian astronomy refers to the astronomy that was practiced during and after the First Babylonian Dynasty (ca. 1830 BC) and before the Neo-Babylonian Empire (ca. 626 BC)), Ea was the ruler of the southernmost quarter of the Sun's path, the "Way of Ea", corresponding to the period of 45 days on either side of winter solstice. Aquarius was also associated with the destructive floods that the Babylonians regularly experienced, and thus was negatively connoted. In Ancient Egypt, Aquarius was associated with the annual flood of the Nile; the banks were said to flood when Aquarius put his jar into the river, beginning spring.

In the Greek tradition, the constellation became represented as simply a single vase from which a stream poured down to Piscis Austrinus. The name in the Hindu zodiac is likewise kumbha "water-pitcher", showing that the zodiac reached India via Greek intermediaries.

In Greek mythology, Aquarius is sometimes associated with Deucalion, the son of Prometheus who built a ship with his wife Pyrrha to survive an imminent flood. They sailed for nine days before washing ashore on Mount Parnassus. Aquarius is also sometimes identified with beautiful Ganymede, a youth in Greek mythology and the son of Trojan king Tros, who was taken to Mount Olympus by Zeus to act as cup-carrier to the gods. Neighboring Aquila represents the eagle, under Zeus' command, that snatched the young boy; some versions of the myth indicate that the eagle was in fact Zeus transformed. An alternative version of the tale recounts Ganymede's kidnapping by the goddess of the dawn, Eos (Eos had a brother and a sister. Helios, god of the sun, and Selene, goddess of the moon), motivated by her affection for young men; Zeus then stole him from Eos and employed him as cup-bearer. Yet another figure associated with the water bearer is Cecrops I, a king of Athens who sacrificed water instead of wine to the gods.