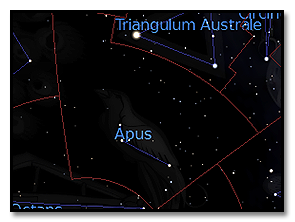 Apus (Aps, Bird-of-paradise, Exotic Bird, Extraordinary Bird) is a faint constellation in the southern sky, first defined in the late 16th century. Its genitive is "Apodis".

Apus was one of twelve constellations created by Petrus Plancius from the observations of Pieter Dirkszoon Keyser and Frederick de Houtman. It first appeared on a 35 cm diameter celestial globe published in 1597 or 1598 in Amsterdam by Plancius with Jodocus Hondius. Plancius called the constellation Paradysvogel Apis Indica; the first word is Dutch for "bird of paradise", of genus Pteridophora, but the others are Latin for "Indian Bee". Apis (Latin for "bee") is presumably an error for avis ("bird").

The name Apus is derived from the Greek apous, meaning "without feet". This referred to the Western misconception that the bird-of-paradise had no feet, which arose because the only specimens available in the West had their feet and wings removed. Such specimens began to arrive in Europe in 1522, when the survivors of Ferdinand Magellan's expedition brought them home.

After its introduction on Plancius's globe, the constellation's first known appearance in a celestial atlas was in Johann Bayer's Uranometria of 1603, where it was called "Apis Indica".

Lists of stars by constellation