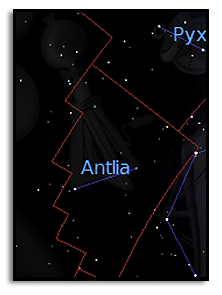 Antlia (Ant) is a constellation in the southern sky. Its name means "pump" and it specifically represents an air pump.

Antlia was created in 1756 by the French astronomer Abbé Nicolas Louis de Lacaille, who created fourteen constellations for the southern sky to fill some faint regions. Though Antlia was technically visible to ancient Greek astronomers, its stars were too faint to have been included in any constellations. Because of this, its main stars have no particular pattern and it is devoid of bright deep-sky objects. It was originally named Antlia pneumatica ("Machine Pneumatique" in French) to commemorate the air pump invented by the French physicist Denis Papin.

Lacaille and Johann Bode (Bode determined the orbit of Uranus and suggested the planet's name) each depicted Antlia differently, as either the single-cylinder vacuum pump used in Papin's initial experiments, or the more advanced double-cylinder version. The International Astronomical Union (IAU) subsequently adopted it as one of the 88 modern constellations. There is no mythology attached to Antlia as Lacaille discontinued the tradition of giving names from mythology to constellations and instead chose names mostly from scientific instruments.

According to some, the most prominent stars that now comprise Antlia were once included within the ancient constellation Argo Navis, the Ship of the Argonauts, which due to its immense size was split into several smaller constellations by Lacaille in 1763. However, given the faintness and obscurity of its stars, most authorities do not believe that the ancient Greeks included Antlia as part of their classical depiction of Argo Navis.