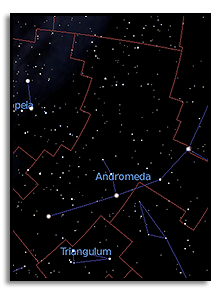 Andromeda (Andromeda, And) was one of the original 48 constellations formulated by Ptolemy in his 2nd-century Almagest, in which it was defined as a specific pattern of stars. Located north of the celestial equator, it is named for Andromeda, daughter of Cassiopeia, in the Greek myth, who was chained to a rock to be eaten by the sea monster Cetus.

The constellation's most obvious deep-sky object is the naked-eye Andromeda Galaxy (M31, also called the Great Galaxy of Andromeda), the closest spiral galaxy to the Milky Way and one of the brightest Messier objects. Several fainter galaxies, including M31's companions M110 and M32, as well as the more distant NGC 891, lie within Andromeda. The Blue Snowball Nebula, a planetary nebula, is visible in a telescope as a blue circular object.

The uranography of Andromeda has its roots most firmly in the Greek tradition, though a female figure in Andromeda's location had appeared earlier in Babylonian astronomy. The stars that make up Pisces and the middle portion of modern Andromeda formed a constellation representing a fertility goddess, sometimes named as Anunitum or the Lady of the Heavens.

Andromeda is known as "the Chained Lady" or "the Chained Woman" in English. It was known as Mulier Catenata ("chained woman") in Latin and al-Mar'at al Musalsalah in Arabic. It has also been called Persea ("Perseus's wife") or Cepheis ("Cepheus's daughter"), all names that refer to Andromeda's role in the Greco-Roman myth of Perseus, in which Cassiopeia, the queen of Ethiopia, bragged that her daughter was more beautiful than the Nereids, sea nymphs blessed with incredible beauty. Offended at her remark, the nymphs petitioned Poseidon to punish Cassiopeia for her insolence, which he did by commanding the sea monster Cetus to attack Ethiopia. Andromeda's panicked father, Cepheus, was told by the Oracle of Ammon that the only way to save his kingdom was to sacrifice his daughter to Cetus. She was chained to a rock by the sea but was saved by the hero Perseus, who used the head of Medusa to turn the monster into stone; Algol (β Persei), the "Demon Star", marks the head of Medusa. Perseus and Andromeda then married; the myth recounts that the couple had nine children together – seven sons and two daughter – and founded Mycenae and its Persideae dynasty. After Andromeda's death Athena placed her in the sky as a constellation, to honor her. Several of the neighboring constellations (Perseus, Cassiopeia, Cetus, and Cepheus) also represent characters in the Perseus myth. It is connected with the constellation Pegasus.