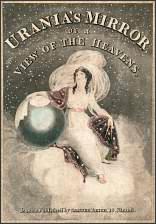 Urania’s Mirror is a boxed set of 32 constellation cards first published by Samuel Leigh of the Strand, London, in November 1824.

An advertisement and review in the The London Literary Gazette for 1824 November 27 describes them as “fitted up in an elegant box” and selling for £1 4s black and white or £1 18s “beautifully coloured”. They were described as “An acceptable present” so no doubt the publication was timed to catch the Christmas market.

The engraver was Sidney Hall but authorship was coyly attributed to “a lady”. Peter Hingley, former librarian of the Royal Astronomical Society in London, has established that the true author was almost certainly the Reverend Richard Rouse Bloxam of Rugby ( Journal of the British Astronomical Association, vol. 104, p. 238, 1994).

Urania’s Mirror features 79 constellations, not all of them still recognized by astronomers, plus three sub-constellations: Caput Medusae (the head of Medusa the Gorgon), seen on Card 6 with Perseus; Mons Maenalus on Card 10 beneath the feet of Böotes; and Cerberus, on Card 11 in the hand of Hercules. The constellation names given in the captions below are as written on the cards themselves.